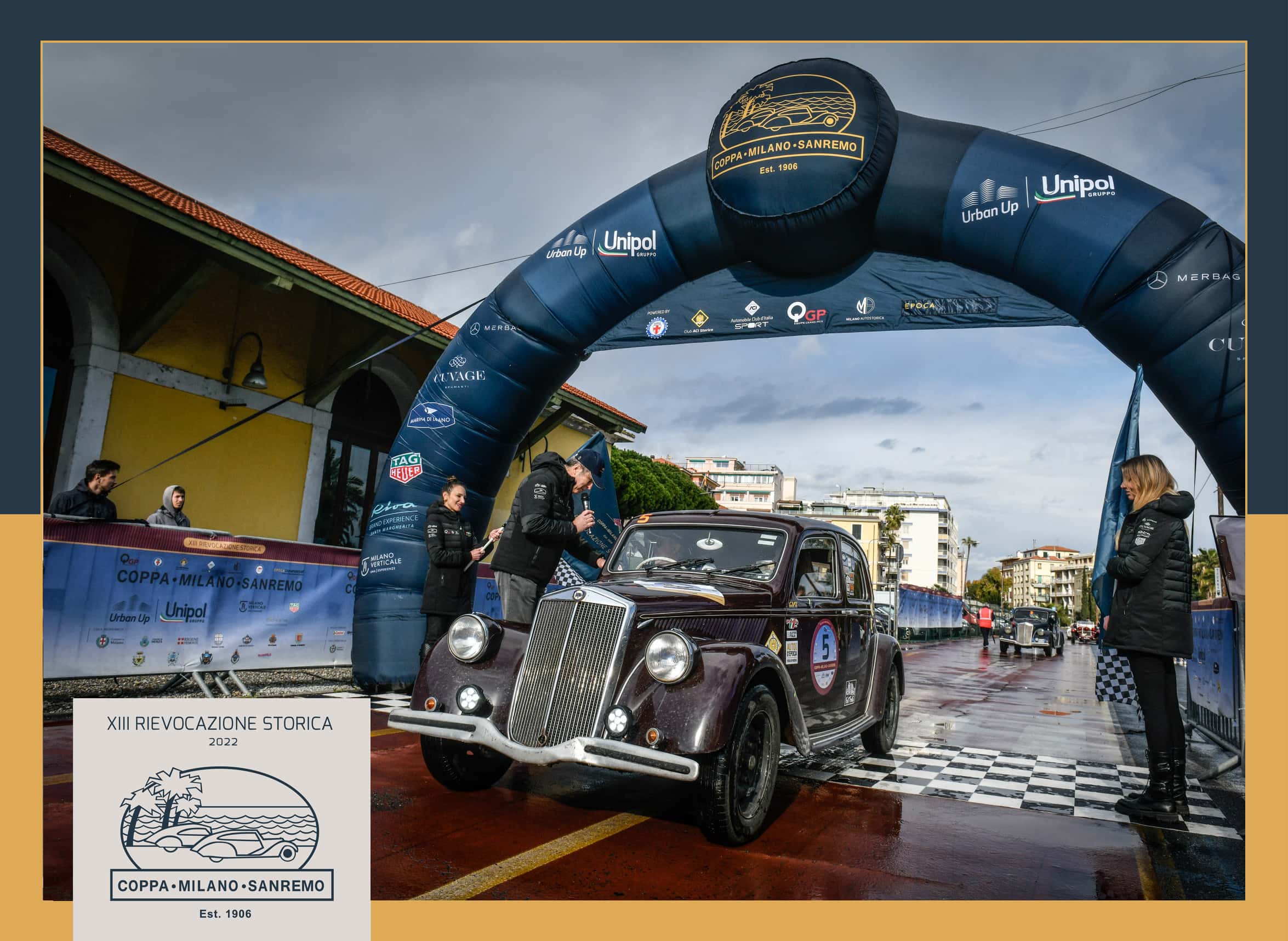 Yesterday, Saturday 2 April, saw the conclusion of the XIII Historical Re-enactment of the Coppa Milano-Sanremo, which started on Thursday 31 March from the Autodromo Nazionale di Monza, with the victory of crew no. 5 made up of Fontanella and Covelli at the wheel of a 1939 Lancia Aprilia, at their debut in the competition. In second place was the experienced pair of Aliverti and Valente (no. 1) in a 1929 Alfa Romeo 6C 1750 Zagato SS. Great performance also for the third classified crew made up of Di Pietra and Di Pietra at the wheel of a 1938 Fiat 508 C (no. 4), in what was a hard-fought competition until the last lap after a final day full of twists and turns up till the finishing line.

“This is the first time we have taken part in this race, which we have always heard about over the last few years, and indeed our expectations have been amply fulfilled: it is a very beautiful and demanding race, particularly adrenalin-fuelled. Of this race we were amazed by the fast pace that kept us focused on each step, we started confident of our possibilities and despite the weather did not play in our favor we remained focused until the end and got this important result” – says Gianmario Fontanella, winning driver of the XIII Historical Re-enactment of the Coppa Milano – Sanremo.

Spectacle and competition were not lacking in this edition of the “Lady” of the races, with an event that has seen the crews, Italian and international, compete in over one hundred special stages (including six medium), confronting in urban and natural landscapes not only with exciting and unconventional tests, but also with adverse weather conditions. In fact, after two days alternating between rain and lightening, the crews had to surrender to the unfavourable weather, due to snow at low altitude, the race was in fact suspended for the Rapallo – Loano section. Without losing enthusiasm, the cars of the past faced the afternoon tests on the treacherous curves of Colle San Bartolomeo and D’Oggia, concluding the sporting part in a sunny Sanremo, the famous City of Flowers, ready to crown as every year the winners of the Historical Re-enactment that bears its name.

The “Lady” of the races brought to the track an edition full of unmissable logistical and sporting novelties in a perfect blend of competition and spectacle, tradition and savoir faire, elements that have always made the Coppa Milano Sanremo an incredible event with a unique charm. First of all the official start on Thursday 31st March at the Autodromo Nazionale di Monza, a cult place of motorsport, where the classic enthusiasts had the opportunity to test themselves in 12 new special stages on the iconic track which also includes the ancient and legendary elevated roads. The tests required a special effort from the crews, but they were surprised and thrilled by the unprecedented experience they were able to take part in. For the first time ever, on Friday 1 April, the crews competed in a series of thrilling time trials held in THE DAP – Dei Missaglia Art Park, a unique urban setting that is part of the INOLTRE project by Urban Up | Unipol dedicated to the regeneration of Milan’s suburbs. In the late afternoon it was time for the eagerly awaited return to Portofino, the pearl of the Tigullio, for the exclusive défilé and elegance contest reserved for the participating cars.

In the splendid setting of the famous piazzetta, the winners of each participating category were announced: the Veteran prize for cars built up to 1946 was won by the 1929 Alfa Romeo 6C 1750 SS Zagato, the Vintage prize for cars built between 1946 and 1976 went to the 1957 Mercedes 300 SL Gullwings, the Instant Classic prize to the 1973 Alfa Romeo GTA Junior and the Sportscar prize to the 2018 Dallara Stradale.

At the end of the charming event, the crews moved to the Principality of Monaco, the cradle of international glamour, in the setting of the prestigious Fairmont Hotel for the unforgettable gala dinner and the final prize-giving ceremony. A perfect finale to seal the virtual twinning between the Autodromo di Monza and the Principality of Monaco, as a tribute to two iconic places, a cult of world motorsport.

This XIII Rievocazione Storica was accompanied by several titles of honour, rewarding the first 10 crews in the general classification of the historic regularity event, the first 3 classified in each grouping and the first 3 classified in the average tests. In addition, the participants were able to aspire to several prizes provided by the sponsors: Mercedes-Benz, through its official dealer Merbag S.p.A., awarded its best crew in the race, the n.40 of Franco Perona and Carla Lertola at the wheel of a 1971 Mercedes 350 SL. The Urban Up | Unipol prize for fair play was presented to the couple Luca Trazzi and Alice Maria Giulini (n.15) on board a 1955 Porsche 356 PRE A. The ‘Nel blu dipinto di blu’ prize was awarded by Marina di Loano to crew no. 84 Maurizio Cesari and Federica Pallotti in their iconic 2001 TVR.

The award for the most sparkling crew offered by Cuvage went to the crew of Enrico Barbieri and Allegra Gucci Barbieri (no. 91) aboard an orange 2021 Lamborghini Huracan, who stood out for their friendliness and liveliness. Honorable mention for the ACI Award proposed by “Via!”, the ACI magazine for the best female crew that was awarded to Antonella Gamberini and Ornella Pietropaolo, crew number 47, who with their 1974 FIAT 124 Abarth also won the “Coppa delle Dame” prize. The Tartarughino club, mediapartner of the event, awarded the ‘Art in Motion’ prize to Paolo Milini and Simona Roscio, crew number 12, on board a 1952 Jaguar XK 120C.

The XIII Historical Re-enactment boasted illustrious partners: Urban Up | Unipol, the project dedicated to the enhancement of the real estate assets of the Unipol Group, and Mercedes-Benz, as institutional partner of the event, through its official dealer Merbag S.p.A. Among the important partners, there was the consolidated collaboration with Cuvage, the Italian excellence of classic method sparkling wine, which was the official supplier of the race for the beverage sector, Marina di Loano S.p.A., which hosted one of the most fascinating stages of the race, Tag Heuer – Official Time Keeper, Riva – Brand Experience Santa Margherita Ligure, Milano Verticale| UNA Esperienze, exclusive location of the opening night.

Participation in the race is reserved for cars built between 1906 and 1990, with an F.I.V.A. passport, or F.I.A. Heritage sticker, or A.S.I. homologation, or A.C.I. Sport sticker, or belonging to a brand register, in order to embrace the important historical heritage of the various groups. Following the great success of last year’s edition and with the intention of widening the target audience, the organisers have decided to re-propose an additional category reserved for youngtimers, instant classics and modern supercars called “Rendez-Vous”.