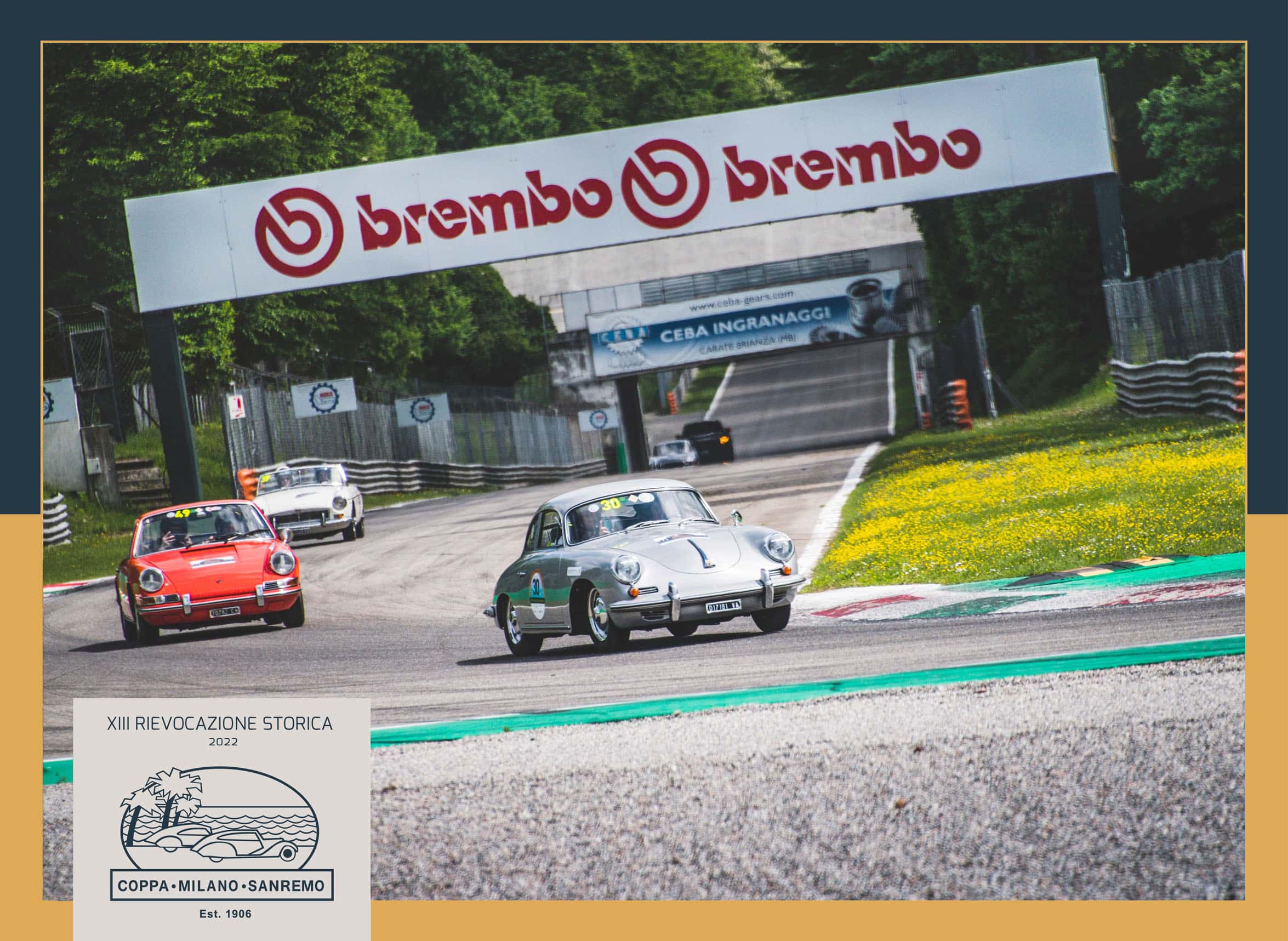 With only a few weeks to go before the start, expectations are growing for the XIII Historical Re-enactment of the Coppa Milano – Sanremo, Italy’s most glamorous and emblazoned race, scheduled from 31 March to 2 April 2022. The event is reconfirmed as a protagonist within the Italian Championship Great Events 2022 of ACI Sport, reserved to the most important classic regularity races.

The “Lady” of the races is preparing for an edition full of unmissable news, logistical and sporting, in a perfect blend of competition and spectacle, tradition and savoir faire, elements that have made the Coppa Milano-Sanremo since 1906 an unmissable event with a unique and exclusive charm for gentlemen drivers and personalities of the international jet set.

Program of the XIII Historical Re-enactment:

The Coppa Milano-Sanremo for the first time will officially kick off on Thursday, March 31 at the Autodromo Nazionale di Monza, a place of worship of motorsport. Here the event, on the occasion of the 100 years of the Autodromo, will pay homage to the legendary Temple of Speed with an unprecedented experience reserved for participants. In fact, in addition to the traditional technical and sporting checks and the always exciting free laps on the track, the classic enthusiasts will have the opportunity to test themselves in 12 new special tests on the iconic track that will also include the ancient and legendary elevated tracks and some parts used exclusively in the recent race of the ACI Rally Monza, final round of the FIA World Rally Championship.

In the afternoon, the inaugural parade of cars will leave for Milan and will then be presented in front of the historic headquarters of AC Milano in Corso Venezia, in the heart of the city.

The day will end with the official opening that will take place in the fascinating spaces of the urban garden of Milano Verticale | UNA Esperienze, located in the district of Porta Nuova – Garibaldi – Corso Como.

“The Historical Re-enactment of the Coppa Milano-Sanremo has been confirmed as an important event within ACI Sport’s 2022 Italian Major Events Championship, which has events rich in charm and culture on its calendar,” says Geronimo La Russa, president of Automobile Club Milano.

“The success and the following of the ‘Coppa Milano Sanremo’, are under everyone’s eyes. And it could not be otherwise: it is the oldest car race in Italy, which was held for the first time in 1906, a year before the bicycle race of the same name. Also in the next edition the top drivers of the regularity will be able to confront themselves in a complex and satisfying route from the exquisitely sporting point of view”, concluded President La Russa.

At the first light of Friday, April 1, the crews will leave from Piazza XXV Aprile to compete in an exclusive series of exciting time trials that for the first time will be held in a new urban context. In fact, it will be THE DAP – Dei Missaglia Art Park, to host this particular experience which is part of the project INOLTRE by Urban Up | Unipol dedicated to the regeneration of the Milanese suburbs of which THE DAP is the most recent and important element, perfectly matching the important program of enhancement of the territory that the Coppa Milano-Sanremo carries out year after year.

The backdrop to the first leg of the race is the splendid natural scenery that winds through the hinterland between Piedmont and Liguria and that will accompany the crews, after a pleasant intermediate break in Acqui Terme at the Cantine Cuvage, to the intermediate stage in Rapallo, to then conclude with the unmissable défilé reserved for the participating cars, in the fascinating setting of the Marina di Portofino.

On Saturday, April 2, the crews will be the protagonists of the last hard-fought challenges: after the traditional start from Rapallo, they will enter the heart of Genoa, face after more than one hundred special tests (six of which are medium type) the insidious curves of the Passo del Turchino, Passo del Faiallo, Colle d’Oggia and Melogno, and then stop for a light lunch at the prestigious Yacht Club of Marina di Loano. The race will see the ending of the sporting part in Sanremo, the famous City of Flowers.

In order to guarantee the competition a unique cosmopolitan experience, the Coppa Milano-Sanremo will return to the Principality of Monaco, the cradle of international glamour, in the setting of the prestigious Fairmont Hotel for the unforgettable gala dinner and the final prize-giving ceremony. A conclusion to seal the twinning between the Autodromo di Monza and the Principality of Monaco, as a tribute to two iconic places, cult of world motorsport.

The XIII Historical Re-enactment boasts illustrious partners: Urban Up | Unipol, the project dedicated to the enhancement of the real estate assets of the Unipol Group, and Mercedes-Benz, as institutional partner of the event, through its official dealer Merbag S.p.A. Among the important partners, there is the consolidated collaboration with Cuvage, the Italian excellence of the classic method sparkling wine that will be official supplier of the race for the beverage sector, Marina di Loano S.p.A, which will host one of the most fascinating stages of the route, Tag Heuer – Official Time Keeper, Riva – Brand Experience Santa Margherita Ligure, Milano Verticale| UNA Esperienze, exclusive location of the opening night and Eyepetizer, innovative Made in Italy brand.

For further information you may contact the Organization of Equipe Grand Prix: