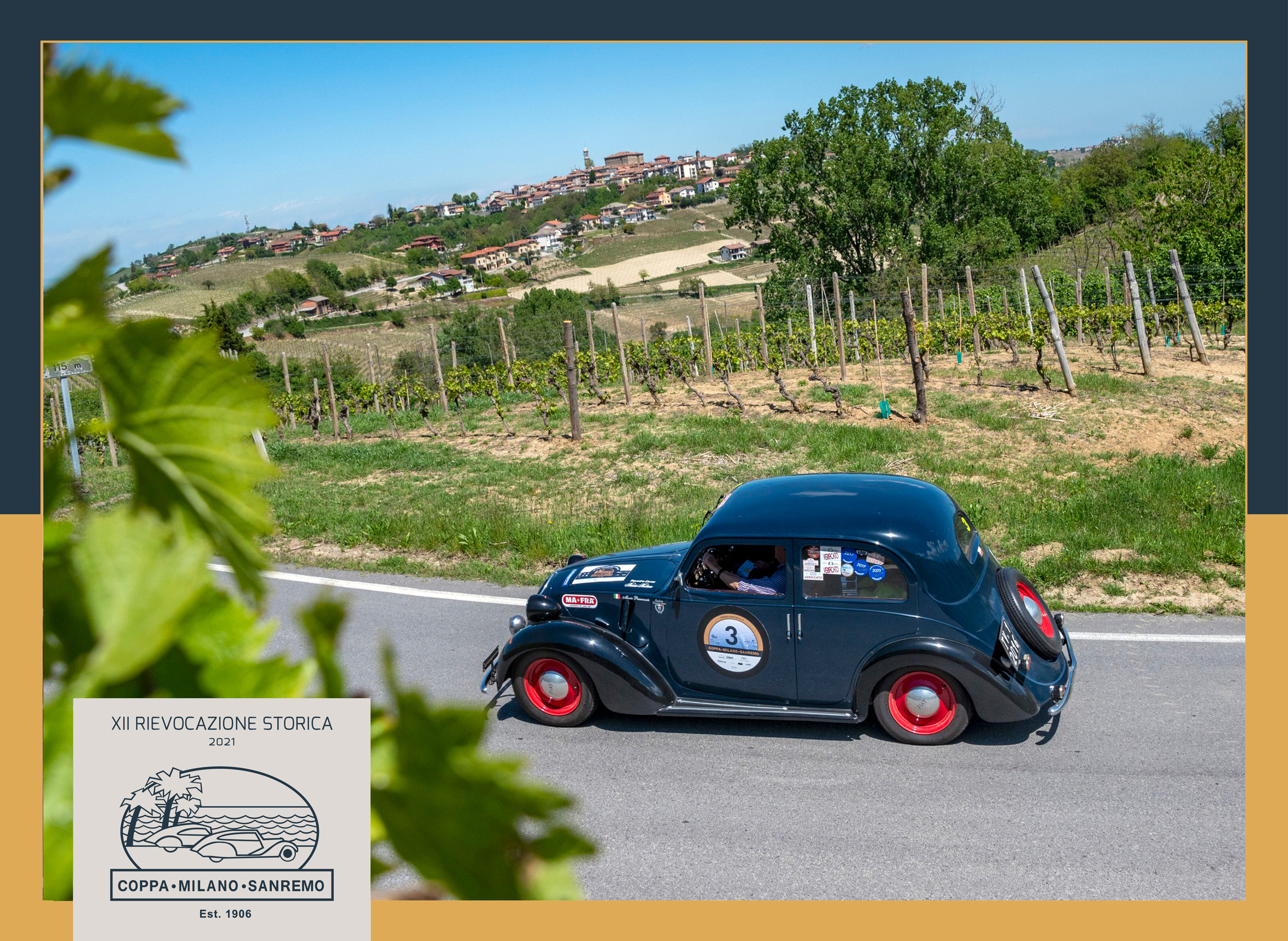 May 9th 2021– Yesterday ended the XII Re-enactment of the Milano-Sanremo Cup, started on Friday from Milan, with the victory of the n.3 crew of Mario Passanante and Dario Moretti at the wheel of a 1937 Fiat 508 C. In second place the pair of Alessandro Gamberini and Guido Ceccardi (crew n.2) on track with a Fiat 514 MM of 1930. Great performance also for the third classified crew of Andrea Giacoppo and Luca Fichera (n.6) driving a Fulvia 1600 HF

Yesterday was the decisive day during which the crews have sustained the last special tests: after the traditional restart from Rapallo passing in the center of Genoa, they have faced the insidious curves of Passo del Turchino, Passo del Faiallo and Melogno, and then enjoy a light lunch at the prestigious setting of the Yacht Club of Marina di Loano. At the end, the timed tests inside the Ospedaletti Circuit, a symbol of motorsport and the arrival in Sanremo, the famous City of Flowers, where the crews also participated in the gala evening and award ceremony in the beautiful Hotel Royal.

This XII Historical Re-enactment was accompanied by 41 titles of honor, to reward the top 10 crews of the general classification of historical regularity, the top 3 classified for each grouping and the top 3 classified in the average tests. In addition, the participants can aspire to several awards made available by the sponsors: Mercedes-Benz, through the official dealer Merbag S.p.A., has awarded its best crew in the race, N. 15 by Giovanni Soldo and Sabrina Messina at the wheel of a 1956 Mercedes 190 SL, he Urban Up | Unipol award for fair play was presented to the couple Didier Brechemier and Stephane Sausier (n.39) on board a 1964 MG B Roadster, while Marcello Grossi along with co-driver Renato Cremonesi was awarded by Cuvage as “Crew more sparkling”.
The “Trofeo d’Eleganza” was awarded by IWC, Schaffhausen to the crew n.16 Filippo Sole and Francesca Rettagliata on the iconic Lancia Dilambda “Blue Shadow” of 1930, also winners of the award given by Natuzzi Italy. The Contest Design has seen awarded by Bellini Nautica the couple Vanni and Christine Curridor (n.19) on track with the beautiful Lancia Aprilia Sport Zagato 1937, while the crew of Enzo Moroni and Enrico Renaldini driving the timeless Porsche Carrera RS 2.7 Lightweight of 1973 was awarded the prize of the Sportscar Contest awarded by Il Tartarughino.

Honorable mention for the “Rinascente” Award, in the form of a sculpture of a Alfetta 159 Formula 1 of the ’50s, made by the well-known artist Beatrice Di Bitetto. The award, with an artistic flavour, as well as the great moral value, which stems from the event of the Milan-Sanremo – the first historical-motor event organized at the time of Covid, is proposed by “Via!” , the magazine of ACI Milano and was assigned to Annalisa Bellante and co-driver Alessandra Ferraris (n.36) aboard a Porsche 356 SC coupè.

The XII Historical Re-enactment also boasted distinguished partners, starting with Urban Up | Unipol, the real estate project dedicated to the enhancement of the real estate assets of the Unipol Group and IWC, Schaffhausen, historic Swiss watchmaking excellence brand and official time keeper, both main sponsors of the event.

Of great value is the consolidated partnership with Mercedes-Benz, as institutional partner of the event, through the official dealer Merbag S.p.A., in addition to the renewed collaboration with Cuvage, the Italian excellence of classic method sparkling wine that will be official supplier of the competition for the beverage sector and with Marina di Loano s.p.a., which will host one of the most fascinating stages of the route. New partners of the event, Milano Verticale| UNA Esperienze, which will host the first exclusive evening, Zepter and Natuzzi Italy, interpreter and ambassador of made in Italy design in the world through unique products able to raise awareness of a distinctive lifestyle that speaks of beauty and harmony.